Front row seats from your private beach at Seaside Escape 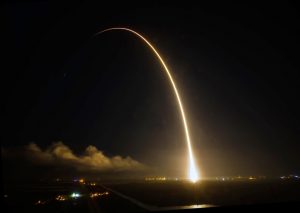 Since October 4, 1957, when Russia launched its first satellite to orbit the earth, Sputnik (literal: fellow traveller), the race for space was on. Explorer 1 lifted off from the Cape Canaveral Missile Annex on January 31, 1958. In 1961, Alan Shepard became the first American to fly into space. What an unbelievable accomplishment! Over the past 6 decades, NASA has launched a total of 166 manned flights, many from the east coast of Florida. While manned space exploration is on hold, you can see rockets lift off from Cape Canaveral and the Kennedy Space Center by the privately-owned aerospace manufacturer and space transport company SpaceX. Check out launch schedules and plan a launch viewing on your own private beach at Seaside Escape: http://www.spacex.com/missions  and   Launch Schedule 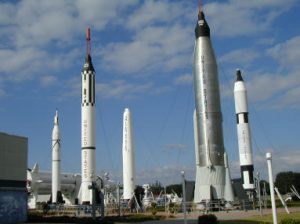 Any trip to the Space Coast of Florida would not be complete without a visit to the Kennedy Space Center. Try a tour bus around the facility, walk through the Rocket Garden, take in the history of space exploration, watch IMAX space movies, and visit the Space Shuttle Atlantis exhibit. Almost too much to do in one day! The 70 minute drive is well worth the time spent. Visit www.kennedyspacecenter.com for more info and to purchase tickets online. 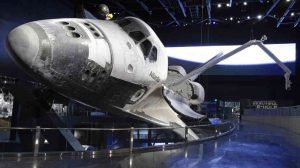 The 5 orbiters: Columbia, Challenger, Discovery, Atlantis and Endeavour have flown more than ½ billion miles (enough to reach Jupiter) and have collectively carried 350 people into space.

The shuttle Discovery is the oldest and most travelled of the winged spaceships, going on 39 missions and logging 148,221,675 miles (enough to travel to the moon and back 288 times or make 1 ½ trips to the sun).

Average shuttle speed is 17,500 miles per hour, allowing astronauts to see a sunrise or sunset every 45 minutes.

Average cost of a shuttle mission was $450 million.

The shuttle Columbia was the heaviest at 178,000 lbs., the equivalent of 13 African elephants.

SpaceX is the first privately-owned company to build and launch its own rockets. Plans are in the works to fly astronauts into space and to land on the surface of Mars.

The Dragon, SpaceX’s rocket, carried a wheel of cheese during its test flight (a nod to a skit on Monty Python’s Flying Circus).

Current Falcon 9 boosters and Falcon 1 rockets are named after the Millennium Falcon in the Star Wars movies.

Brevard County, Florida’s telephone area code is 321 – a nod to the space industry.

Mankind will not remain on Earth forever, but in its quest for light and space will at first timidly penetrate beyond the confines of the atmosphere, and later will conquer for itself all the space near the Sun.
– Konstantin E. Tsiolkovsky, father of cosmonautics

…space is for everybody. It’s not just for a few people in science or math, or for a select group of astronauts. That’s our new frontier out there, and it’s everybody’s business to know about space.
– Christa McAuliffe, December 6, 1985